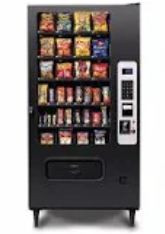 It was past midnight and the freshman dorm was quiet. I could hear the faint snoring of my roommate in the bunk bed above.  I was wide awake.  I hadn’t eaten for three days and my stomach was growling.

I reached for my wallet on the bedside table and extracted a few singles. There was a vending machine in the lounge down the hall.  I’ll just get some crackers, I told myself.

But one by one an array of candy bars clunked to the receptor. Soon I was back in bed, under the blanket, unwrapping a Milky Way bar.

There was a rush of satisfaction at the first bite of stretchy caramel. One bar eaten.  Then two.  I knew I should stop. But within minutes all that remained were crumpled wrappers and shame.  How many I had consumed was unclear.

I reached for my wallet and pulled out more singles.

The year was 1976 and eating disorders did not yet have a name. I rode a rollercoaster of bingeing and purging.  When bingeing, I found hiding places across campus, skipping classes, avoiding people. When purging, I was on the running track, furiously clocking in the miles.  I had diuretics and diet pills at my disposal.  I starved myself for days on end.

That summer, it became so bad that my parents put padlocks on their kitchen cabinets.  They sent me to a hypnotist and a psychologist. They threatened to send me to a mental health facility in Vermont.

How could God love someone like me?  It was unfathomable.

And eventually I reached for His hand to pull me out of the pit.  His hand had been there all the time.

As I gripped that hand, the rollercoaster slowed down.  I recall small victories – the time  I ordered one slice of pie at Baker’s Square – ate it slowly – and did not return to buy the whole pie.  The day I sat in the school cafeteria and ate a peanut butter sandwich in full view.

Forty years later, I still over-exercise. And when I step on the scale, I brace myself on the bathroom sink.  But when the number pops into view, and the desire to over-control threatens to overtake me, God says,

You are more than a number. I love you.

3 thoughts on “More than a number”